Those Who Remained - Enzian Theater

Buy a Virtual Festival Pass to save and enjoy all festival programs from the comfort of your own home! Click here to learn more.

Winner of 4 Hungarian Oscars including Best Picture, Director, Screenplay and Actor, and Hungary’s official entry for the 2020 Academy Awards, this wistful and touching period piece is the lyrical story of the healing power of love in the midst of conflict, loss, and trauma.  Having survived the camps, 42-year old Aldo lives a solitary life as a doctor in Budapest. 16-year old Klara lives reluctantly with her great-aunt, holding on to hope that her father and mother will return. She meets Aldo, and soon the two of them find something in each other that has long been absent in their lives. As they grow closer and closer, the joy in both of their lives slowly returns. But as the Soviet Empire rises to power in Hungary, their pure and loving father-daughter relationship is misunderstood and frowned upon. Understated and affecting, THOSE WHO REMAINED reveals the healing process of Holocaust survivors through the eyes of a determined young girl in post-World War II Hungary. 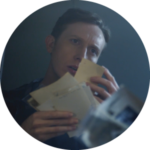 Winner! Best Short Film – Monaco Int’l Film Festival!
Dirk Kramer plays piano for the residents of a memory care facility.  One day he figures out how he can utilize his talents as an actor to better serve the community of Dementia and Alzheimer’s patients.