Come early and grab The Secret Formula from Eden Bar for only $8! Made with Coconut Vodka, Pineapple, Lime, and Passionfruit and it comes with its very own gummy “Krabby Patty,” too. 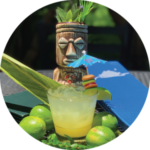 For the entire month of August, we will be collecting school supplies to be donated to A Gift For Teaching. Feel free to bring whatever supplies you’d like to donate to this screening!

In this lively animated adventure, undersea oddball SpongeBob SquarePants and his starfish friend, Patrick, embark on a quest to clear the name of Mr. Krabs, the owner of the Krusty Krab restaurant, who has been framed for stealing the crown of ocean deity King Neptune. Leaving the familiar confines of Bikini Bottom, SpongeBob and Patrick venture out towards Shell City, where they hope to find Neptune’s crown, but numerous obstacles stand (or float) in their way.