This film will take place at the Orlando Science Center Digital Adventure Theater.

Winner of the Audience Award for Best Documentary at the Seattle Jewish Film Festival, this directorial debut follows a young Israeli-American woman grappling with religion, love, and identity after her younger sister marries outside the faith. Becky Tahel’s intimate, deep and joyous investigation starts by asking “why marry Jewish?” and ends up exploring the subtler inquiry “why be Jewish?”. Through a series of conversations and trips, from Grenada—where her sister Gal has attended med school—to Israel–where she engages in conversations with locals and studies Torah–Becky’s 6-year journey shifts the very course of her life and gives an authentic voice to those struggling to fit in, find their purpose and identity, and own their individuality in a world that begs for assimilation.

Preceded by:
A JEW WALKS INTO A BAR 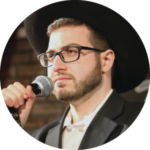 Ultra-Orthodox Jew David Finkelstein struggles to balance his love of stand-up with his strict religious lifestyle until he’s forced to make a choice between his passion and his community. Winner of the Best Doc Short award at the River Run International Film Festival.